In this paper, the improved ecological network analysis framework is applied to study the internal metabolic process and external stability of the urban energy metabolism system. Firstly, based on the analysis of ecological network, the sectors are selected from the three stages of urban energy production, transformation and consumption to build an ecological network model. Then, according to the metabolic process and stability characteristics of urban energy system, the Network Environ Analysis and Ascendency are integrated, and the time dimension is expanded. Finally, the data of Beijing from 2007 to 2016 are selected for empirical study. The results show that: (1) the cumulative consumption of raw coal and coal products and natural gas has changed significantly, the former has decreased from 3448×104 tce to 1283×104 tce, and the latter has increased from 560 ×104 tce to 3699×104 tce; (2) the electricity, heat and water production and supply sector consumed the most energy; (3) the energy transfer pathways between sectors has changed significantly. The results of stability analysis show that the overall stability of Beijing's energy metabolism system is increasing year by year, but there is still space for further improvement. This provides an important reference for optimizing the energy utilization structure of Beijing in the future and further promoting clean energy initiatives. 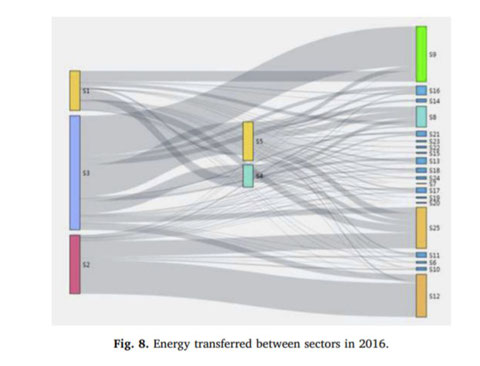 Energy transferred between sectors in 2016.