Revista de Geografía Norte Grande is published by the Geography Institute of the Pontifical Catholic University of Chile. It is a triennial periodical publication (May, September and December). Published since 1974, it brings together empirical and theoretical research, which accounts for advances in the most diverse streams of geographic research and related sciences, related to the Chilean case and also to Ibero-American places, regions and countries. The title of this publication originates when, in the 1970s, a group of specialists from the Norte Grande Workshop of the Geography Institute of the Catholic University of Chile decided to share their research and conclusions with the rest of the scientific community. persisting in the imperative that it was to carry out integrated and interdisciplinary regional studies of this territory. In the years to come, the growing complexity of the world and, therefore, the national space demanded the opening to other spaces that went beyond the limits of the particular Chilean boreal territory. This is how to "Norte Grande", from the number 7 of 1980 the expression "Geography Magazine" is preceded, with which it is wanted to express the desire to cover diverse geographic problems that transversally cross our country. At the beginning of the 21st century, the greater integration of the sciences and of the countries, is rapidly generating the urgent need for publications to be able to unify knowledge about processes that often go beyond political borders. In this scenario, the Revista de Geografía Norte Grande has opted for an integrating and interdisciplinary vision, although focused on the case of Chile, of increasingly global geographic processes, referring to the reality of Ibero-America. 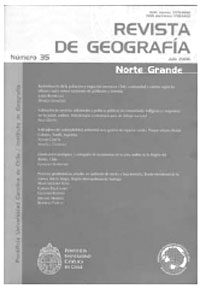