Manufacture of concrete in Mikkeli

Concrete production volumes in Mikkeli have been extracted from the environmental permits of three plants:

BetSet Ltd plant in Pursiala, Mikkeli manufactures wall elements and ready-mixed concrete. Concrete elements are manufactured for use in the construction industry throughout Finland, as well as concrete pumping and transport to the vicinity of Mikkeli. Production volumes in 2002 were 10,000 m3 ready mixed concrete + 10,000 m3 wall elements. Production volumes have not changed significantly. Information was got from environmental permit / authorities but the document is not publicly available.

SBS Betoni Ltd´s plant in Tikkala, Mikkeli is the largest in Finland in terms of area and production capacity. The plant produces ready-mixed concrete, which is delivered to construction sites and used in the production of its own prefabricated plant. SBS Betoni Ltd manufactures concrete elements for the needs of the whole country. Of the concrete produced, approximately ¼ is sold as ready-mixed concrete and ¾ is used in own element production. The annual concrete production at the plant is about 75,000 t. Environmental permit is granted in 2012.

There were also data on raw materials used in concrete manufacturing in environmental permits of companies.

Available within this Dataset 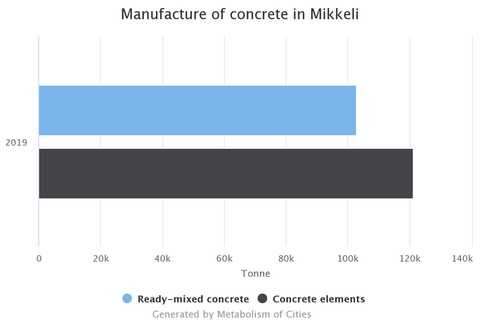