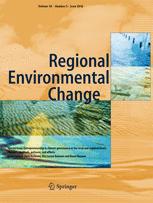 This paper tests the hypothesis that relocation of pig production within the EU27 can reduce the external costs of nitrogen (N) pollution. The external cost of pollution by ammonia and nitrate from agriculture in the European Union (EU27) in 2008 was estimated at 61–215 billion € (0.5 to 1.8% of the GDP). Per capita it ranged from more than 1000 € in north-west EU27 to 50 € in Romania. The average contribution of pig production was 15%. Using provincial data (224 NUTS2 regions in EU27), the potential reduction of external N cost by relocation of pig production was estimated at 14 billion € (10% of the total). Regions most eligible for decreasing the pig stock were in western Germany, Flemish region, Denmark, the Netherlands and Bretagne, while Romania is most eligible for increasing pig production. Relocating 20 million pigs (13% of the total EU stock) decreased average external costs per capita from 900 to 785 € in the 13 NUTS2 regions where pigs were removed and increased from 69 to 107 € in 11 regions receiving pigs. A second alternative configuration of pig production was targeted at reducing exceedance of critical N deposition and closing regional nutrient cycles. This configuration relocates pigs within Germany and France, for example from Bretagne to Northern France and from Weser-Ems to Oberbayern. However, total external cost increases due to an increase of health impacts, unless when combined with implementation of best N management practices. Relocation of the pig industry in the EU27 will meet many socio-economic barriers and realisation requires new policy incentives.