A study was carried out to develop a typology of urban metabolic (or resource consumption) profiles for 155 globally representative cities. Classification tree analysis was used to develop a model for determining how certain predictor (or independent) variables are related to levels of resource consumption. These predictor variables are: climate, city GDP, population, and population density. Classification trees and their corresponding decision rules were produced for the following major categories of material and energy resources: Total Energy, Electricity, Fossil fuels, Industrial Minerals & Ores, Construction Minerals, Biomass, Water, and Total Domestic Material Consumption. A tree was also generated for carbon dioxide emissions. Data at the city level was insufficient to include municipal solid waste generation in the analysis. Beyond just providing insight into the effects of the predictor variables on the consumption of different types of resources, the classification trees can also be used to predict consumption levels for cities that were not used in the model training data set. Urban metabolic profiles were also developed for each of the 155 cities, resulting in 15 metabolic types containing cities with identical or almost identical levels of consumption for all of the 8 resources and identical levels of carbon dioxide emissions. The important drivers of the differences in profile for each type include the dominant industries in the cities, as well as the presence of abundant natural resources in the countries in which the cities are the main economic centers.

Available within this Thesis 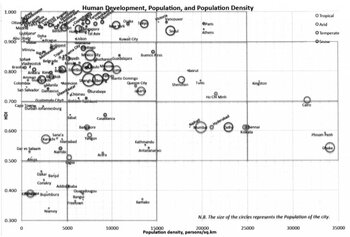