This article analyzes the mass of the materials that flowed through the Italian economy during 1994 and compares the results with a similar analysis of Germany, Japan, the Netherlands, and the United States published by a collaboration headed by the World Resources Institute. In order to perform this comparison, we have evaluated the mass of the materials produced within the country and the mass of the imported materials and commodities. For the domestic production, imports and exports, we have also evaluated the mass of the materials that accompany—as “hidden flows”—each physical flow.Our analysis indicates that, in 1994, Italy experienced total material requirements (TMR) of 1,609 million metric tons (Mt), of which 727 Mt was used as direct material input (DMI). A comparison with other developed countries shows that the TMR and DMI flows, measured in mass per person and in mass per GDP unit, are, in Italy, lower than the corresponding figures evaluated for the United States, Germany, and the Netherlands. An interpretation of these results is presented. The analysis may give information useful for environmental considerations, although the limits of such an approach are made clear. 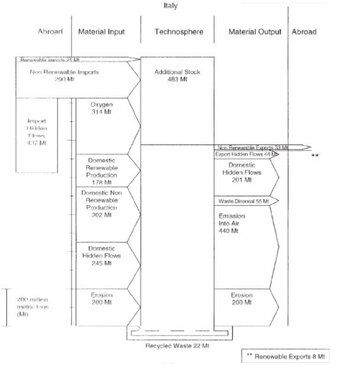